You are here: Home › News › NYC Must Not Deny Representation of Immigrants With Criminal Convictions
By Sylvia Rivera Law Project on May 8, 2017 in Immigrant Rights Project, Legal, News, Other News
Tweet 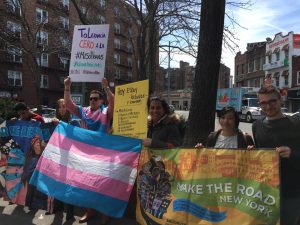 What it means to call a city a “sanctuary city” has never had a precise definition. At the very least, we expect a sanctuary city to not ban the possibility that immigrants be able to effectively exercise their legal right under immigration law not to be deported, no matter what complex life experiences and records they have lived through.

One month ago, immigration advocates in New York State cheered the news of the financial and geographic expansion of the New York Immigrant Family Unity Project (NYIFUP), a public defense program for immigrants in detention facing deportation proceedings throughout the state. NYIFUP funds high-quality immigration legal services at non-profit organizations, such as Brooklyn Defender Services, the Legal Aid Society, and the Bronx Defenders. The program makes it possible for these organizations to connect financially eligible and unrepresented immigrants in detention with a legal advocate to represent them in immigration court—a right to immigration counsel, to mirror the right to criminal counsel that the nation has recognized is a constitutional right.

From my work with our clients and members at the Sylvia Rivera Law Project, I know that NYIFUP has always had its shortcomings. As a program that only funds lawyers for individuals who are currently in deportation proceedings, it does not reach the thousands of undocumented or underdocumented trans, gender non-conforming, or intersex (TGNCI) immigrants who have been fortunate not to have been targeted by immigration enforcement or those who were previously in deportation proceedings and received an unfair or inadequate judgment. In a way, the name of the program alone—a “Family Unity Project”—leaves behind TGNCI immigrants who fled transphobic and abusive family in their countries of origin and were able to piece together their lives and identities for the first time in the U.S. as part of strong TGNCI immigrant communities, like the translatinx community in New York City.

But I am still so grateful that NYIFUP exists. A well-funded legal corps that defends those in detention, getting immigrants out of punitive, abusive, and highly transphobic conditions, and fights for their right to remain in the U.S., despite the Department of Homeland Security’s insistence that a person is illegal and deportable, is a monumental contribution to what SRLP sees as the greater immigrant justice struggle. TGNCI individuals who find a life and home here in the U.S., but are told they cannot because of where they were born or which citizenship they bear, deserve to be able to choose safety. They deserve to be able to choose respect. Detained TGNCI immigrants who boldly ask for these basic rights in court deserve great lawyers from our ally organizations.

That is why I am horrified that in the last week, New York City Mayor Bill de Blasio clarified that the NYIFUP expansion in New York State could, in fact, limit immigrants’ right to counsel in NYC. De Blasio has stated publicly that the city will NOT provide deportation-preventing, lifesaving legal support to immigrants who have a “deportable” criminal offense on their records.

As members and allies of hyper-policed, overly criminalized, and unfairly punished communities—TGNCI communities, communities of color, immigrant communities with limited English skills, people living with mental health needs—we must refuse to equate involvement with broken criminal systems in the U.S. with guilt and blame. When will the city stop penalizing us for the systemic oppression we experience, that it contributes to? Why are we punished again and again for our identities? When immigration laws, as conservative and outdated as they are, appear to recognize that a person has rights that survive their criminal records, we must demand that New York City do better too.

Federal, state, and local-level immigration policies and practices are changing each day, creating a whiplash effect of anxiety and uncertainty amongst the TGNCI immigrant community and those who stand with them. What New York City and New York State need to do now, if they want to live up to their public proclamations that they intend to protect their immigrant residents, is to stop the empty rhetoric, actually pass policies that protect immigrants, and be clear and transparent on where they stand in this fight to support some of the most vulnerable amongst us.

Our clients and members are immigrants with criminal records earned from fighting back against TGNCI-targeted harassment from police officers. Immigrants who were abandoned by healthcare systems that lacked TGNCI-competent physical and mental healthcare. Immigrants who were bullied out of school for being queer, who persisted, subsisted, and learned everything they could about survival and community from the streets. Our clients and members’ records aren’t flawless, but are a product of everything they’ve lived through. We are here, living and loving and growing and fighting in the city we call home. Are you on our side?

An open letter the Sylvia Rivera Law Project and 103 other organizations have signed on to demanding that De Blasio not withold NYIFUP to immigrants with criminal convictions. http://www.legal-aid.org/media/215104/nyifup_community_org_sign_on.pdf

New York State Becomes First in the Nation to Provide Lawyers for All Immigrants Detained and Facing Deportation
https://www.vera.org/newsroom/press-releases/new-york-state-becomes-first-in-the-nation-to-provide-lawyers-for-all-immigrants-detained-and-facing-deportation

A New Resource for Incarcerated Trans, Gender Non-Conforming, and Intersex New Yorkers
Building Together Towards Liberation: Tools & Resources for Resistance