In February, the NYC Board of Correction released an assessment of the Transgender Housing Unit (the THU) which can be found here.[1] The Board is a nine-person, non-judicial oversight body that regulates, monitors, and inspects the correctional facilities of the City. It is tasked with holding the Department of Corrections accountable for its implementation of and compliance with minimum standards regulating conditions of confinement and correctional health and mental health care in all City correctional facilities.

Since the THU opened in 2015, SRLP and other advocates have been trying to show the Board the Department’s systematic neglect of the THU by reporting our clients’ individual stories and experiences with the unit. In response, the Department has continually dismissed our members’ experiences by making excuses, such as that an individual’s experience is an outlier or blaming computer systems. The Board’s assessment, however, provides us with scaled information that undeniably affirms the experiences our members have been voicing since 2015 – that despite numerous policies through PREA, the Board’s Standards , and the Department’s own directives, the radical potential of the THU to provide safer and more humane conditions for incarcerated transgender, gender non-conforming, and intersex people (TGNCI people) is lost due to the Department’s failure to implement such policies and blatant disregard for TGNCI people’s lives.  It is disappointing and frustrating that the voices of our clients and members were not enough on their own to change these policies and practices. While the Assessment of the THU is an excellent tool, the voices of our clients and members should be taken seriously on their own as lived truths.

The Board held a meeting on March 13th to discuss the assessment, but SRLP was unable to attend as we were in Albany demanding the passage of the HALT Solitary Act and the end to New York State’s use of torture through solitary confinement. SRLP submitted a letter in which we provided additional recommendations and suggestions we strongly urge the Board to adopt. Those recommendations and suggestions are outlined here:

SRLP strongly urges the Board to use this assessment to hold the Department accountable for its systematic failure to keep TGNCI people safe while incarcerated.

On April 20th, SRLP attended the Board meeting yet again and shared one of the most egregious incidents we have reported to the Board yet. Despite multiple complaints and efforts by advocates across the city, a transgender woman survived two rapes in a period of fewer than 96 hours. This woman – a longtime member and friend to SRLP – allowed us to share her story with the Board on the condition of anonymity. 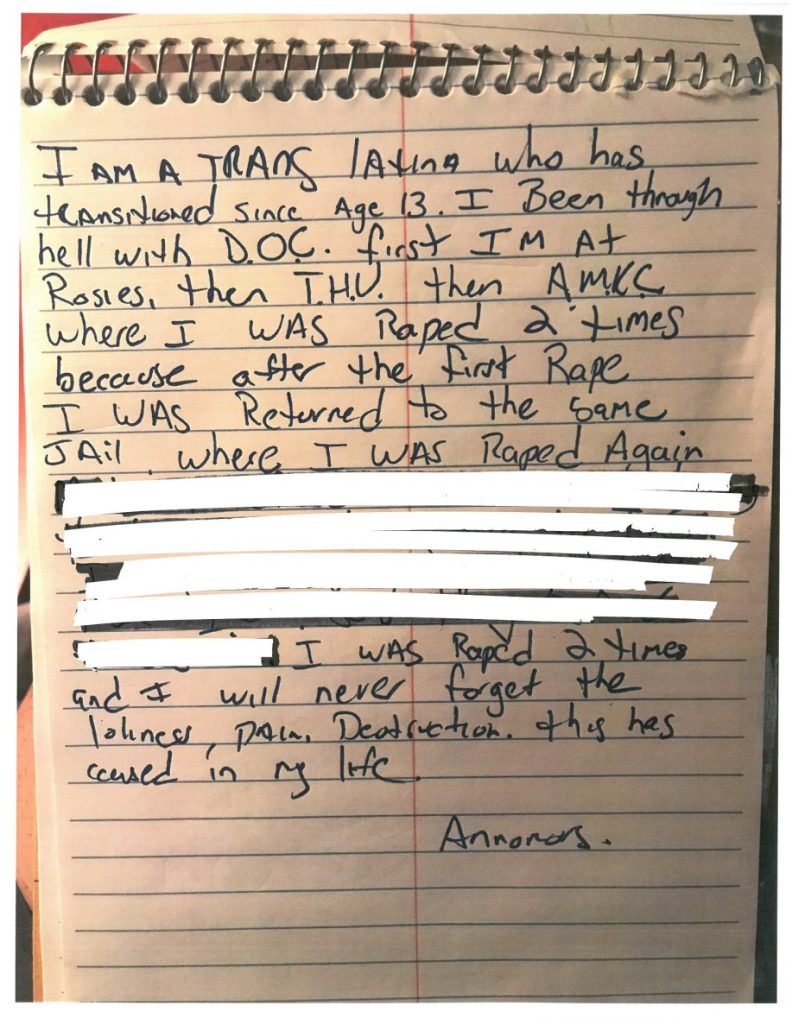 SRLP is no longer confident that the Department is able to handle the necessary changes needed to seriously end sexual violence in the city jails. In light of recent publications from the Board, including the THU Assessment, SRLP urges the Board to issue a Notice of Violation for the Department’s failure to comply with the Minimum Standards surrounding the Prison Rape Elimination Act.

SRLP will be attending the next Board meeting on May 8th and we ask members, supporters, and allies to join us in advocating for the Board to take the necessary steps in ensuring the Department either invests in enormous systematic efforts to keep incarcerated TGNCI people safe or releases all TGNCI people, because it refuses to keep us safe. Please join us in the second-floor auditorium at 125 Worth Street at 9 am on May 8th.

[1] “The Department of Correction (DOC) issued its Transgender Housing Unit (THU) policy on alternative housing options for transgender people in custody in December 2014. DOC’s THU policy requires transgender men to be housed in protective custody at the Rose M. Singer Center (RMSC) and transgender women to be housed in a facility designed for male occupancy. The THU is available exclusively to transgender women but is not guaranteed for all transgender women. Through data analysis and observations of the THU, this assessment of the THU seeks to inform the ongoing discussion of the unit’s operations, future plans for the unit, and implementation of Minimum Standards intended to ensure the safety of transgender people in custody.” http://www1.nyc.gov/site/boc/reports/board-of-correction-reports.page