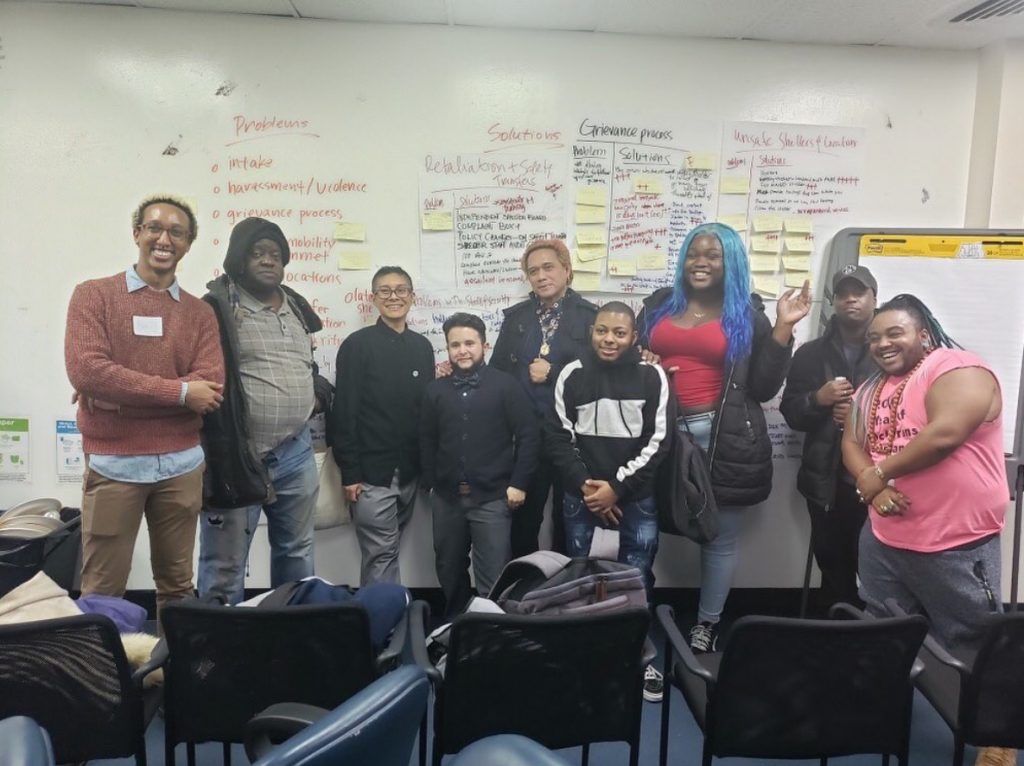 CALL TO ACTION: If you are TGNC person in the NYC Shelter System or were in the last 6 months we want you to fill out our survey: bit.ly/SRLPSafeShelter

This fall 2018 SRLP launched our Shelter Organizing Campaign to support the safety of trans and gender non-conforming (TGNC) people in the shelter system. Low-income TGNC people and TGNC people of color receiving services from the NYC Human Resource Administration, specifically the Department of Homeless Services (DHS) and HIV/AIDS Service Administration (HASA), and who are in need of re-entry services, housing support as undocumented folks, and who are disabled, are vulnerable in city systems, face harassment, violence, and lack of support.  For decades our communities have faced issues accessing supportive housing services at DHS and face overall barriers to affordable and safe housing. Sylvia Rivera believed deeply in fighting for our rights for safe and affirming housing. Her legacy and our struggle continues!

What are we fighting for? Immediately, we are working to address issues of safety for TGNC folks in the shelter system. Our long term goal is sustainable housing for low-income TGNC folks in New York City. Our Campaign involves photo documentation, Know Your Rights resources, a survey for tgnc people in the shelter and actions. Learn more about the history behind our campaign, our demands, our lead organizers, and upcoming action steps below.

In 2006 SRLP was instrumental in helping the DHS develop language and policy around TGNC peoples’ right to access the shelter system here in NYC. The 2006 policy stated “you have the right to be housed in a shelter that corresponds to your gender identity, not according to your birth sex. Shelter workers are required to address you as you request, and place you in a shelter that matches your gender, no matter what your legal documents say.”  Based on the newest language from DHS Directive on LGBTQ folks released in 2017, “The New York City Department of Social Services (DSS), including the Human Resources Administration (HRA) and the Department of Homeless Services (DHS), is committed to providing all employees, clients and individuals who interact with our agencies a safe, healthy, inclusive, affirming and discrimination-free environment.”

Despite policy created to protect TGNC folks, our communities know from experience that TGNC people are unsafe in the NYC Shelter System, as well as HASA. For TGNC people this can look like: misgendering, misnaming, being turned away for services, being outed by staff, unsafe bathroom and shower conditions, violence and harassment, not receiving support to exit the shelter, not being prioritized for housing or services, living in unsafe buildings and conditions, and experiences of discrimination from case managers, security guards, staff and other clients.

Most important to highlight, our members have expressed overwhelming experiences about how their mental and physical health has been impacted by DHS.  Issues such as not being able to safely shower or access the bathroom, issues with sleep and sleeping arrangements, delay in access to surgery or medical care while in a shelter, or the fact that many TGNC people have already suffered violence and harassment from family, school, medical or service providers, and in public spaces that deeply impact our mental and physical health, which is then exacerbated by similar experiences in the shelter system.

In the summer of 2016 SRLP met with DHS and other key stakeholders to push DHS to open a trans specific shelter. We were told by then Department of Social Services Chief Special Services Officer Dan Tietz, “That it was not time for a trans specific shelter.” Later that year in the winter of 2016 DHS opened Marsha’s House, the first LGBTQ DHS Shelter ever created that served people 30 years old and under. Despite the fact that we told DHS how great the need was for TGNC folks and for folks of all ages, we have spent the last 2 years supporting members and clients who navigated Marsha’s House and other shelters facing violence, harassment, and discrimination.

In the fall of 2017, in a response to the unsafe DHS conditions that many of our clients and members have been navigating, SRLP’s Movement Building Team formed the Shelter Organizing Team. Initially meeting to develop a KYR Wallet-card for TGNC folks in shelter, and expanding to create a Know Your Rights (KYR) training for trainers, the team has now formalized demands and we are calling for action.

On October 9th 2018  at the Gender Marker Bill Signing members, interns, and staff who are a part of the Shelter Organizing Team silently held a banner in front of Mayor Bill DeBlasio, city council members, and agency staff that read “TGNC People M, F, and X are unsafe in DHS, house us now!”

For the next 6 months our demands include:

Use photos to depict the living conditions in the DHS Shelter and creation of a checklist (i.e. dangerous exposed socket, roaches and bugs, rodents, broken doors in the shower, sheets, heating, pipes, needles, food conditions, toilets and shower.)

We will use these photos on banners at the action and in social media campaign.

We created a survey for TGNC folks that reflects the 6 demands we have and will use this data to make DHS comply with our demands. To fill out the survey click here: bit.ly/SRLPSafeShelter

This June we will mobilize and have our folks at the table, including get news and press involved.

The plan is to rally 200 TGNCI people and allies to push DHS to grant our demands, if not all demands are met then we hope to be at the table to negotiate or continue. We will mobilize at 33 Beaver street and then possibly march to city hall if DHS doesn’t come to negotiate or schedule with us.

If you are currently experiencing issues of harassment or discrimination in the shelter system and need support please contact the Sylvia Rivera Law Project 212 337 8550 ext. 309 for Hannah Walker, Director of Survival and Self Determination.

To get involved in SRLP’s Shelter Organizing Team contact sasha@srlp.org