You are here: Home › News › SRLP’s Mik Kinkead Talks About Name Changes in Prisons
By Sylvia Rivera Law Project on July 17, 2017 in News, SRLP In The Media
Tweet

In Truthout, SRLP’s Director of Prisoner Justice Project Mik Kinkead talks about the difficult processes and expenses involved in name changes for our trans and gender non-conforming clients who are behind bars. 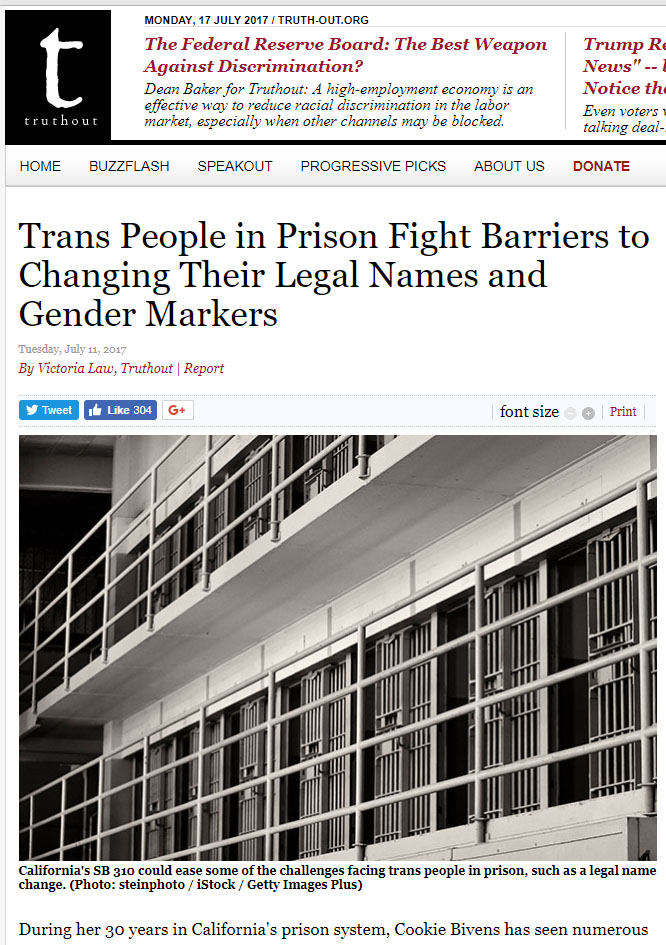 Mik Kinkead, SRLP’s staff attorney and director of its Prisoner Justice Project, is currently working with 30 people on name changes. The Project not only helps people navigate the court process and obtain necessary documentation, but also covers the costs. It’s an expense that takes up one-third of the Prisoner Justice Project budget, but is the only way that many behind bars would be able to change their names.

Even then, the process is not necessarily quick or easy. Kinkead estimates that he files four to six petitions in a six-month period; most of that time is spent waiting to obtain a certified birth certificate in order to complete the court petition. One client, he told Truthout, filed her petition three years ago; only recently did she receive her birth certificate. She is now waiting to be placed on the court’s special calendar for name changes. Even then, she may not have her name changed immediately; the judge might require additional information, which takes more time to gather.

Another client was never issued a birth certificate. The Office of Vital Records sent a certificate of no certificate, which certifies that no birth certificate was ever issued. The judge initially refused to believe it, delaying the process even more and requiring a back-and-forth conversation. The woman, who filed for a name change in December 2015, is still awaiting a decision. “Had she not been in prison and had she been in New York City, she could have gotten this done within a week,” Kinkead said. But even if an applicant lived in New York City before incarceration, they must file their petition in the county of the prison.

In Louisiana, however, people who are in prison, on parole or probation are not allowed to legally change their names until they complete their sentence. People who have violent felony convictions are ineligible for name changes even after completing their sentences.

Read more about this here