You are here: Home › News › Trans and Gender Non-Conforming People Have a #righttoknow Who is Targeting and Policing Us
By Sasha Alexander, SRLP Director of Membership on October 15, 2017 in Membership, News, SRLP News
Tweet 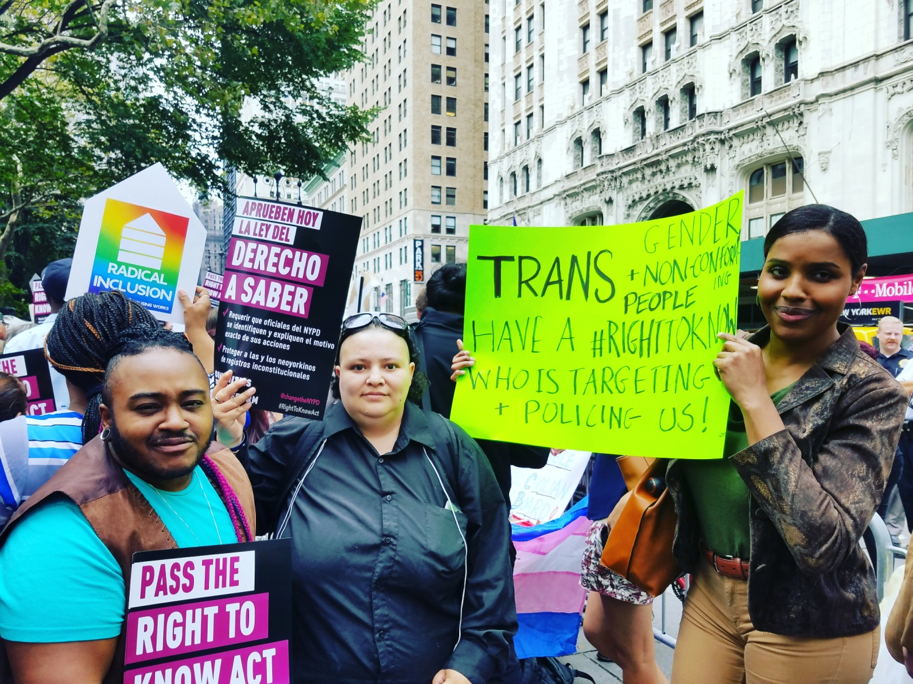 “I felt liberated and inspired with SRLP, to see people from all walks of life come together to fight for the same cause, for people of color and immigrants to get a bill passed. Pass the Right to Know Act! Today was phenomenal. I have lots of love.” – Terri (Movement Building Team member).

On Wednesday, October 11, staff and members from the Sylvia Rivera Law Project’s Movement Building Team showed up to rally support with hundreds of New Yorkers outside of City Hall to demand that NYC Council pass the Right to Know Act.  The Right to Know Act would increase protections for communities that experience over-policing and criminalization by requiring that officers state their names and the reason for the interaction, among other protections.

The Sylvia Rivera Law Project believes community-driven solutions like the #righttoknowact are important steps towards greater accountability for the NYPD.  It’s critical that advocacy and organizing efforts continue to be led by people disproportionately impacted by over-policing, profiling, and increased criminalization, such as trans, gender non conforming, and intersex people (TGNCI) who are low-income, people of color, and immigrants.

More info about the Right to Know Act:

“The Right To Know Act is a legislative package to protect the civil and human rights of New Yorkers in everyday encounters with the NYPD by improving transparency and accountability. It consists of two bills (Int. 182B & Int. 541A) that are endorsed by 200+ organizations, have majority support in the NYC Council and are awaiting a vote.

Int. 182B of the Right to Know Act would help end abuses in a range of non-emergency police encounters by requiring officers to identify themselves and explain the reason for the official interaction.

Int. 541A would help end deceptive and unconstitutional searches by requiring officers to explicitly convey a person’s right to refuse a search when their consent is the only legal justification, and obtain objective proof that a person gave informed and voluntary consent.”

For more info about the Right to Know act, check out: http://changethenypd.org/RightToKnowAct 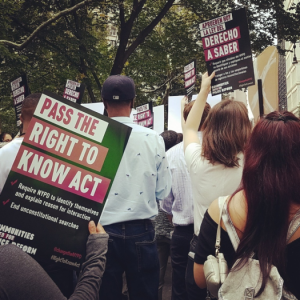 Stay tuned for more updates from SRLP on our organizing to support the leadership of low-income trans and gender non conforming people in NYC!