You are here: Home › News › Closing Rikers is Good, Working Towards Abolition is Our Mission
By Sylvia Rivera Law Project on April 14, 2017 in News
Tweet 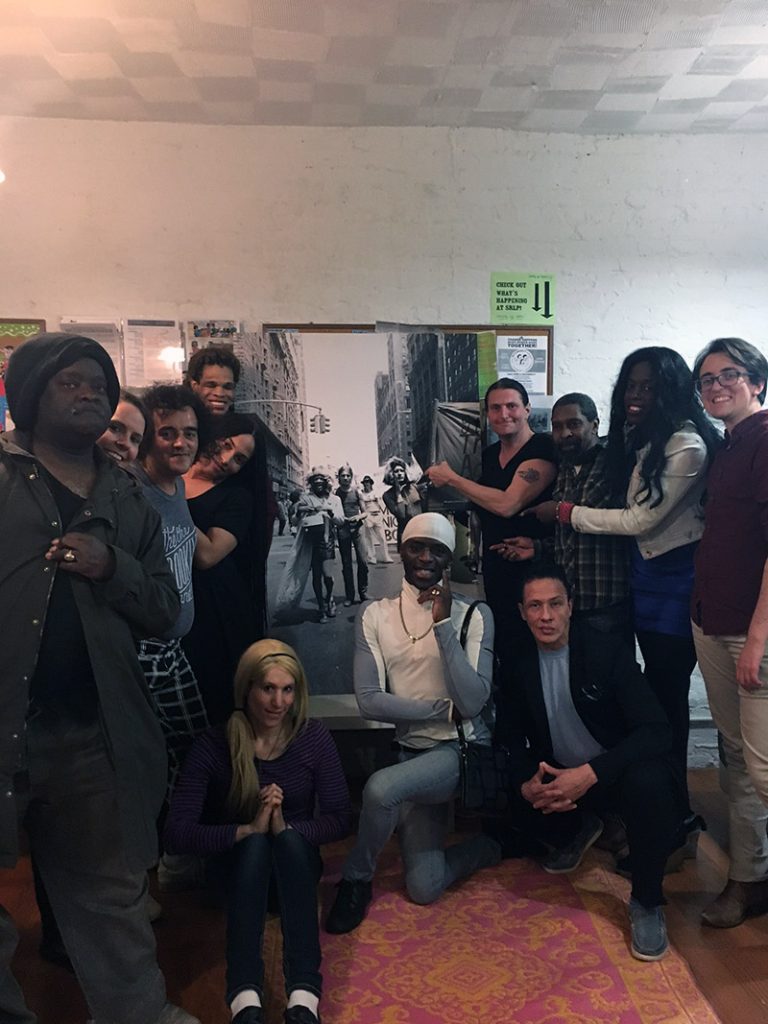 These past few weeks have been a time of great change for those of us working in the criminal (in)justice worlds. Last Friday Mayor de Blasio announced quite unexpectedly that he will support a ten-year plan to close Rikers Island. The day before, SRLP and our allies attended a Board of Correction meeting where the New York City Department of Correction announced what it referred to as a plan for housing transgender and gender non-conforming people in the NYC jail system. SRLP wanted to take a moment and update our communities on how we are responding to this announcement and to reaffirm our mission of abolition.

It is important to note that the plan to close Rikers Island is a ten-year plan. Despite the detailed recommendations that came out of the Independent Commission on New York City Criminal Justice and Incarceration Reform’s recent report, we have yet to hear a specific and detailed plan as to what closing Rikers Island might involve.

The Report itself is clear that closing Rikers Island requires a reduction in the current jail population. To achieve this, the Independent Commission has suggested a multi-prong approach using alternatives to incarceration, rethinking the use of bail, and investing in community-based solutions. Building new facilities and renovating existing facilities in specific counties is also a part of the plan, bringing individuals out of the geographic isolation that is Rikers Island and closer to service providers, family members, and the courts.

Rikers Island currently houses around 10,000 individuals but has the capacity to house up to 15,000. 80% of the individuals currently on the Island are merely awaiting trial, having been denied bail or having been unable to afford it. The remaining county facilities house the 1,400 individuals held in the city jails other than Rikers Island . The plan that the Mayor seems to be endorsing would reduce the total jail population to 5,500 people. De Blasio has said that “we need the fewest facilities possible” yet we have not seen a plan as to what he means.

All of these announcements are the result of decades of activism by formerly incarcerated people, their loved ones, and advocates, including multiple class-action litigations that highlight the violence in the New York City jails and the intense vulnerability and isolation experienced by transgender and gender non-conforming people in these same jails.

There are sections throughout the Report which clearly state the horror that is Rikers Island. One such passage reads: “We are recommending, without hesitation or equivocation, permanently ending the use of Rikers Island as a jail facility in any form or function.” Yet, it is upsetting that it took this long, took this many deaths, took this much violence to our loved ones to reach this conclusion. This sadness is deepened when we are reminded that the Report and the Mayor’s announcement both focused solely on closing Rikers Island. The issue of our jail system itself – that we are putting humans in cages – was itself not investigated. That we will undoubtedly be calling upon the closure of all facilities for strikingly similar reasons as to why we are calling upon the closure of Rikers Island was not mentioned. The Report says closing Rikers Island  is a “moral imperative”, yet we would say that it is a moral imperative to end the practice of incarceration and detention.

The voices that SRLP asks all of us to focus on are those of the individuals who have survived the NYC jails and their loved ones. The following statement from Akeem Browder, brother of Kalief Browder, stands out to all of us: “We need alternatives to incarceration. Just because the jail will be shiny and new and not the decrepit horrible place that is Rikers, it’s still transferring humans from one cage to another cage. We want rehabilitation, not punishment. We need human care and compassion, not people being beaten and starved.”

SRLP stands behind statements such as Akeem’s. We demand an end to incarceration and an end to a world where people are placed into cages, where their every movement is scrutinized, where their lives are deemed to be disposable and of less worth than other peoples.

Sadly, but unsurprisingly, the Report itself mentions transgender people only three times in its 146 pages. Yet the Report states that “transgender-specific units should be designated in both women’s and men’s areas to protect the safety of all transgender individuals held” – a statement that stands in stark contrast to what the New York City Department of Correction (DOC) proposed at the most recent Board of Correction meeting.

At the last meeting, the DOC presented what it referred to as a “plan” to convert the Transgender Housing Unit into multiple Special Population Units. These new units would mix together transgender women, gender non-conforming feminine people and cisgender men who are “short” or “non-English proficient” or otherwise deemed to be “vulnerable.” These units would only exist in men’s facilities, and no mention of transgender men or transmasculine people occurred at all. Astonishingly, and in direct contrast to Federal law, DOC plans to make this unit involuntary – meaning you do not elect to go into it, and you cannot choose to leave it.

SRLP was in the audience at this meeting and we are proud to share that with our coalitional partners, we spoke out strongly against this plan, mentioning that no transgender people participated in the creation of this plan and that it flies in the face of what transgender people have been requesting to increase our safety. In light of our joint testimony, it was announced that an ad-hoc group to investigate safe housing of transgender people would be quickly formed by the BOC.

We know that intense community pressure and direct actions will be needed in the coming months and years. We must continue to work hard to ensure that those who are currently inside the city jail system are listened to in every step of this process. Please keep checking our Campaign Page over the next few months to read more about our work in the city jails.

It is true that “Rikers is irredeemable” as Chief Judge Lippman and City Council Speaker Melissa Mark-Viverito wrote. But the practice of incarceration itself is irredeemable. We do not solve it by creating new jails or investing more money into this system. Below, we list some of the steps SRLP is committed to taking as we face the ongoing crisis in how transgender and gender non-conforming people are housed and as we try to expand thinking from closing Rikers Island to closing all jails.