You are here: Home › News › Protective Custody & The Right to Work – A Former PAC Member’s Letter on the Lack of Safe Housing and Job Accessibility for Transgender Women in Prisons
By Sylvia Rivera Law Project on December 11, 2017 in News
Tweet 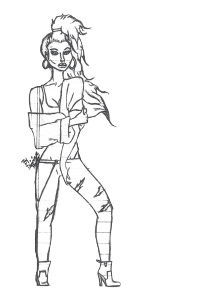 who wrote to us earlier this year while she was housed in the Transgender Housing Unit (THU). The THU is a specialized unit for transgender women currently stationed at the Manhattan Detention Center (MDC). With the exception of the THU, the MDC is a jail for men. This means that women in the THU interact with men and with Department of Corrections’ staff who believe they are working in a men’s facility. We have written about the THU many times over the past years and you can read some of those articles here and here. While the intention of the unit is to provide specialized services and protection for transgender women, who face disproportionate rates of violence and isolation while incarcerated, sadly, we know the THU has been lacking in terms of support throughout its existence.

In her letter, Victoria outlines some of the injustices she and other trans women face while incarcerated, from inaccessibility to proper work to high rates of violence and harassment. She calls for a proper housing solution that delivers on the promises that were initially made for the THU, and urges the community to recognize transgender rights. We are happy to share that Victoria came home in early June!

Please note that there is some discussion of coerced sex work and sexual/physical assault in the letter.

“Letter from the THU”

I want the public to be aware that transgender women are not treated fairly in the jail institutes. The male population does not allow us work as SPA (Suicide Prevention Assistance), or in the kitchen, or as servers in the dorms. To a certain degree, staff members (C.O.) also prevent us from working. Because of the many male inmates who prevent us from working, we are subjected to hand wash their underwear, socks, and tee shirts for a few dollars. Some of us perform sexual favors, and others must sell our daily phone calls for a few commissary items.

If we do not comply with the male population, we are threatened to pack our belongings and move to another dorm only to be subjected to the same treatment after a few days inside the newly assigned dorm. Then, the cycle begins again until we finally we are subjected to sign into protective custody, or be forced into involuntary protective custody, which renders us ineligible to work, participate in programs, and seclude us from the general population. Once in P.C. or I.P.C. it is very likely we will be harassed there by the male population.

The solution to this problem is to designate transgender with our own dorm, allowing those who administer hormone therapy, not just anyone who is gay or claims to be gay, and allow transgender to comingle with the general population.

Meet the Advisory Committee for It’s War in Here!
Transformation in 2018 and Beyond