You are here: Home › News › SRLP community members stand up for their right to safe and adequate healthcare
By Sasha Alexander, SRLP Director of Membership on August 19, 2019 in News
Tweet

Earlier this summer, the Trump Administration levied yet another attack against the TGNCI (transgender, gender non-conforming, and intersex) community by attempting to roll back important nondiscrimination protections for TGNCI people in healthcare. As members of the TGNCI community, we know all too well the ways that harassment, discrimination, and violence prevent us from getting the care that we need to survive and thrive. In a showing of strength and resilience, members of the SRLP community recently came together to condemn these changes and stand up for their right to access safe, medically necessary, and affirming healthcare by drafting and submitting public comments in opposition to the changes. 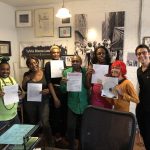 The Affordable Care Act (also known as the ACA or “Obamacare”) was a landmark piece of legislation, not only because it provided insurance coverage to many Americans for the first time, but also because it included the first broad-based nondiscrimination protections in health coverage and care. The ACA includes a provision known as Section 1557 which prohibits discrimination on the basis of race, color, national origin, sex, age, and disability in health programs and providers that receive federal funding. This provision includes most hospitals, doctor’s offices, and health insurers.

In 2016, the U.S. Department of Health and Human Services (HHS) published a rule explaining how to interpret Section 1557. Among other things, the rule explicitly stated that discrimination on the basis of sex includes anti-transgender discrimination and is therefore illegal.

On June 14, 2019, HHS proposed a new version of the Section 1557 rule that removes these protections for TGNCI people, putting our communities at greater risk of inaccessible and inequitable care. The proposed rule also makes it easier for healthcare providers and insurers to discriminate against people with chronic illnesses and/or disabilities (e.g., HIV/AIDS), people who need access to termination-of-pregnancy care, people who do not speak English as a first language, and LGBQ people.

Here at SRLP, we firmly condemn these changes and recognize them for what they are – yet another blatant attempt by the Trump Administration to marginalize and erase TGNCI people and stoke fear in our intersecting communities. Earlier this week, SRLP submitted a formal comment in opposition to these changes, citing the profound harm that healthcare discrimination causes our communities. You can read our comment here.

The move by the Trump Administration to remove TGNCI protections marks one of several of the unrelenting attacks on TGNCI people. Recently, the Department of Housing and Urban Development proposed a rule that would allow discrimination against TGNCI people in shelters in states that do not already have local protections. Fortunately, New York is one state that already has local protections. HHS is also expected to release a rule that makes it easier for foster care agencies to refuse LGBTQ foster parents. And last year, we wrote about HHS’ leaked memo and futile attempt to “define transgender out of existence.”

Regardless of what the Trump Administration says or does, we know that no actions by our government can ever define who we are or make us disappear. We have always been here and we will continue to live our lives in the face of a hostile administration.

Am I still protected?

We are fortunate to have robust state-level protections and remedies for TGNCI New Yorkers who experience discrimination in healthcare. A recent letter issued by Department of Financial Services outlines these protections and states that “regardless of actions at the federal level, New York state law prohibits discrimination based on sexual orientation, gender identity or expression, or transgender status.”

If you or a loved one have experienced discrimination and are looking for legal help, please click here to learn more about services.

With love and solidarity,