You are here: Home › Campaigns and Series › Join Us in Ending Isolated Confinement in New York State Prisons

The Sylvia Rivera Law Project (SRLP) is honored to be an endorsing organization behind the HALT Solitary Confinement Act. As part of the Campaign for Alternatives to Isolated Confinement (CAIC), SRLP seeks to end the practice of placing individuals in known torturous conditions within our state prisons. Isolated confinement is an unsafe and inhumane practice that causes horrendous deterioration of people on a psychological, physical, and social scale.

SRLP is proud to join our members on the inside and many other organizations to name this practice for what it is: torture that is steeped in racism, sexism, and ableism. Trans people, people of color, and people with disabilities make up the majority of people held in solitary confinement – this is because this torturous practice is focused on punishing identity and survival and serves no other purpose.

We know this fact not only from the numbers, but from the stories our members tell us and the experiences we have had advocating for our loved ones.

SRLP is getting ready for our lobby day to push the New York State assembly and legislator to pass the HALT Solitary Act and end this torturous practice. This year, the lobby day will be on March 13, 2018. Please sign up for the action here. You can also come to our membership event on Tuesday, February 27 from 6:00 – 8:00 pm to learn more about the day and directly register with SRLP. During this event, we will discuss solitary confinement and its immediate effects on TGNCI people, practice giving our “elevator speeches” on why solitary is a TGNCI issue, and do general prep for the day.

At our February 27 meeting, we will also be sending out packets to our incarcerated members telling them about the lobby day and asking them to help bring their voices to the day itself. We will be mailing out forms where our members can share artwork, poems, essays, or simply add their names to this effort.

SRLP has been attending the HALT Solitary Lobby Day for the past three years. Below are some images of SRLP members at the last HALT Solitary lobby day in 2017: 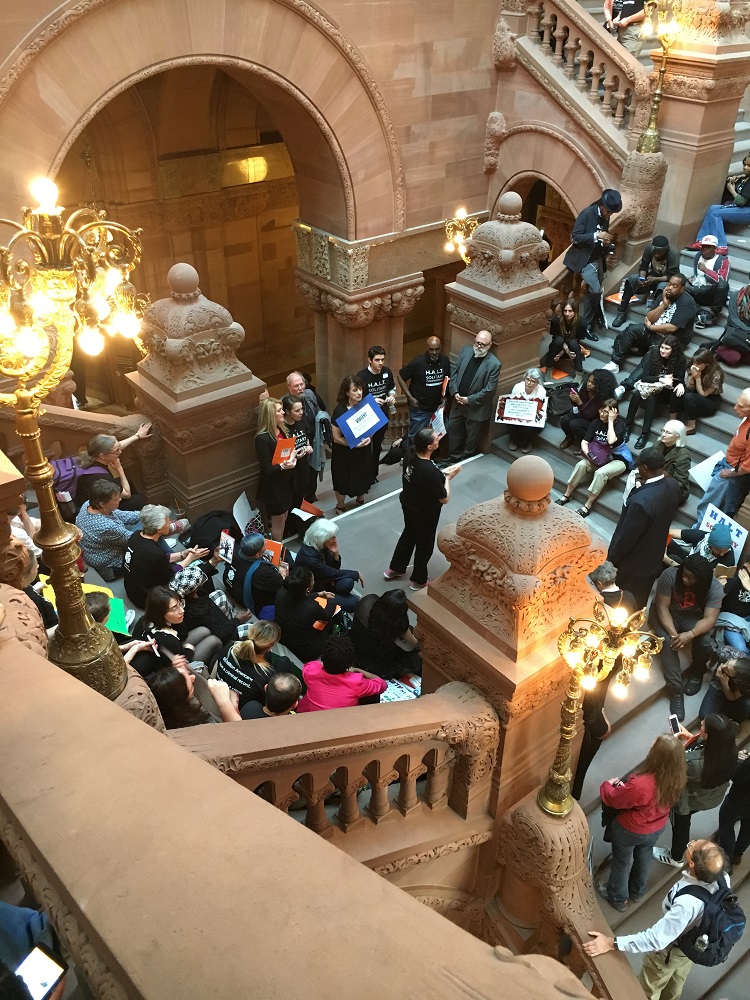 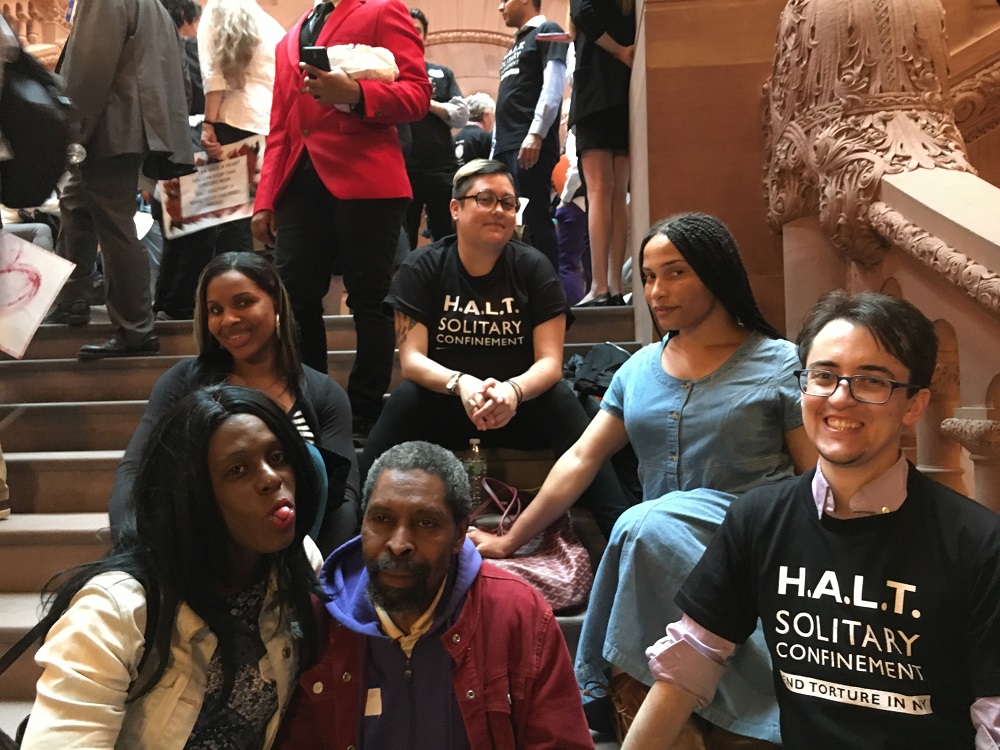 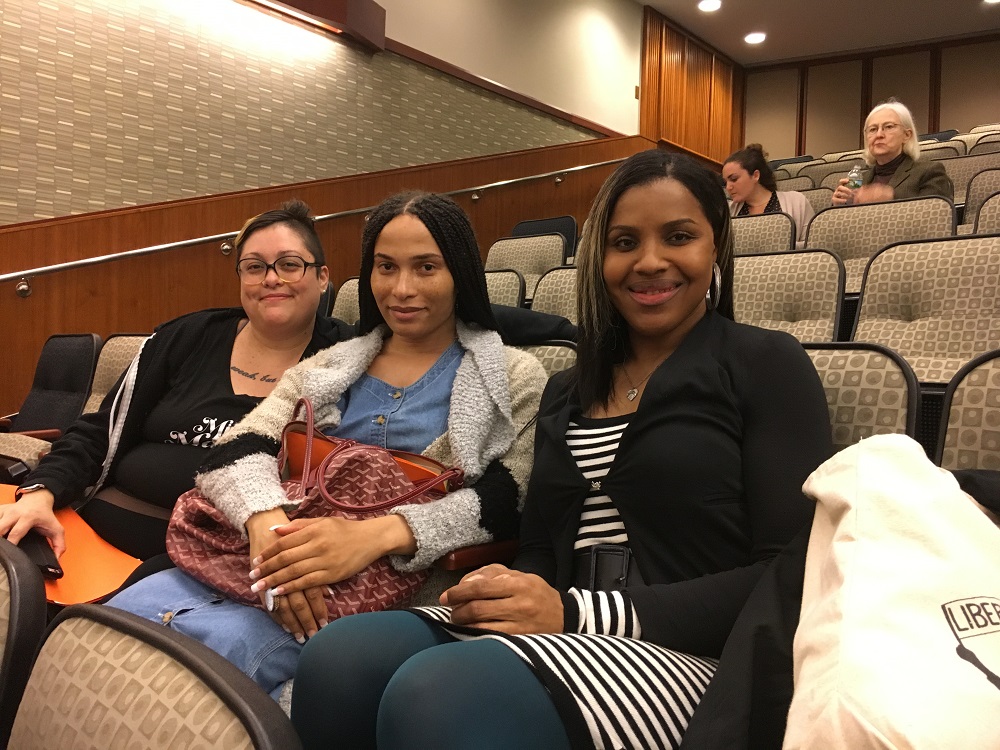 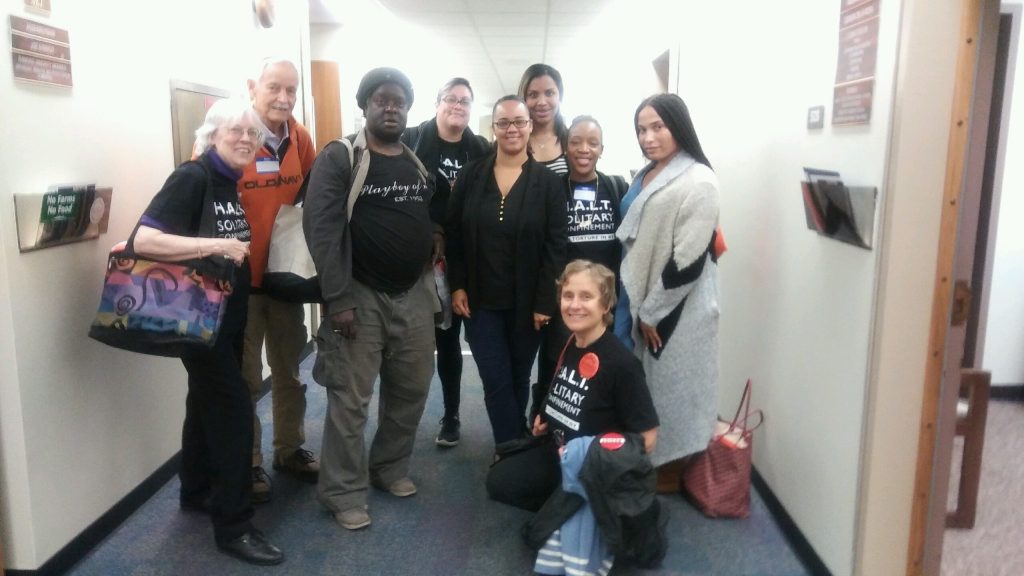 We recently sent a blank sign to our Prisoner Advisory Committee (PAC) members and asked them to share why ending solitary confinement matters. The responses, from genderqueer folks, transgender women, and transgender men held throughout the US speak to the torture that is solitary. You can see some of the signs in our slideshow below. Also pictured are our members on the outside with signs depicting why they support the HALT Solitary Act. 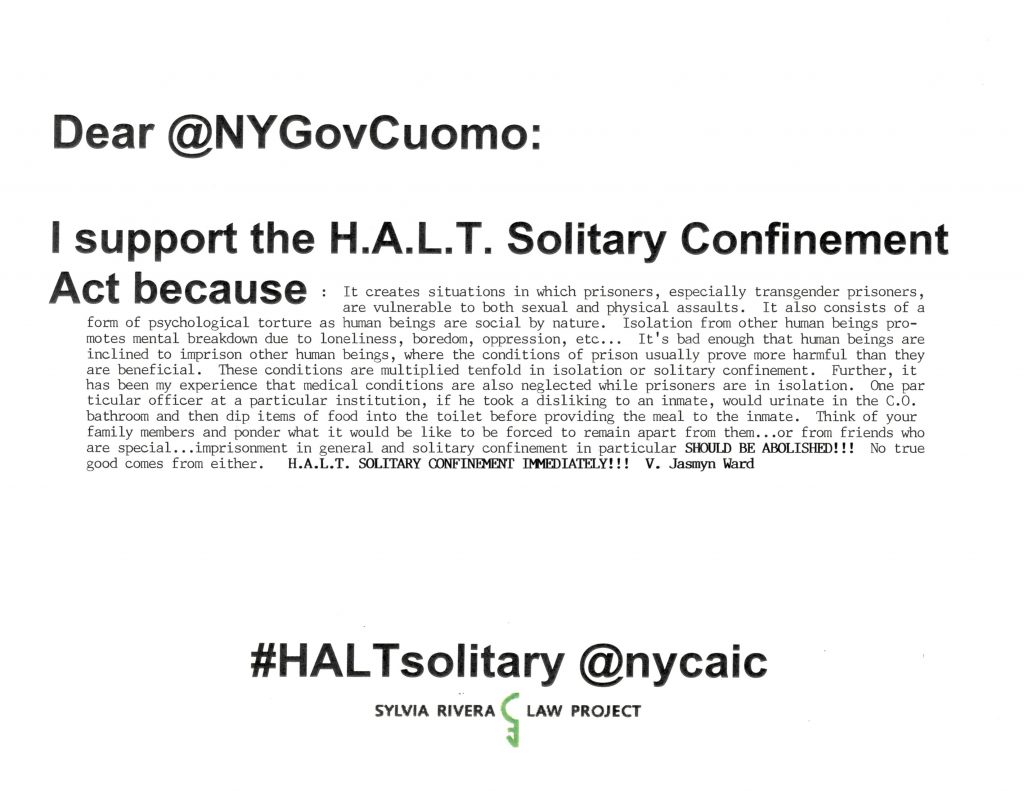 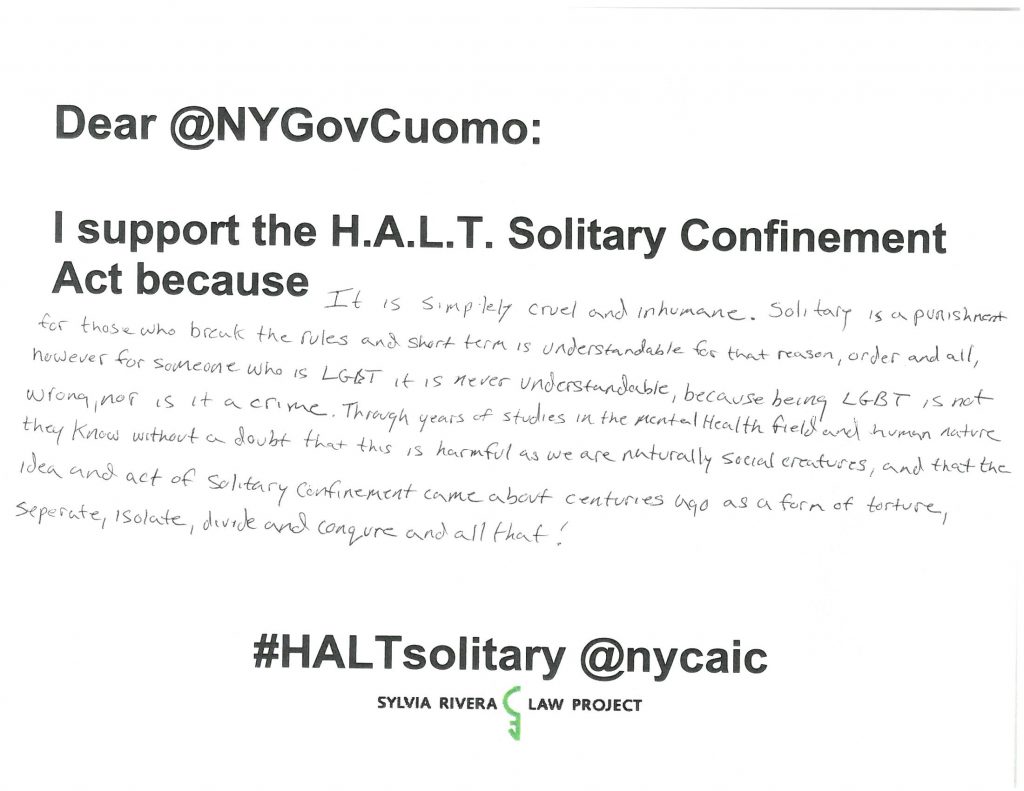 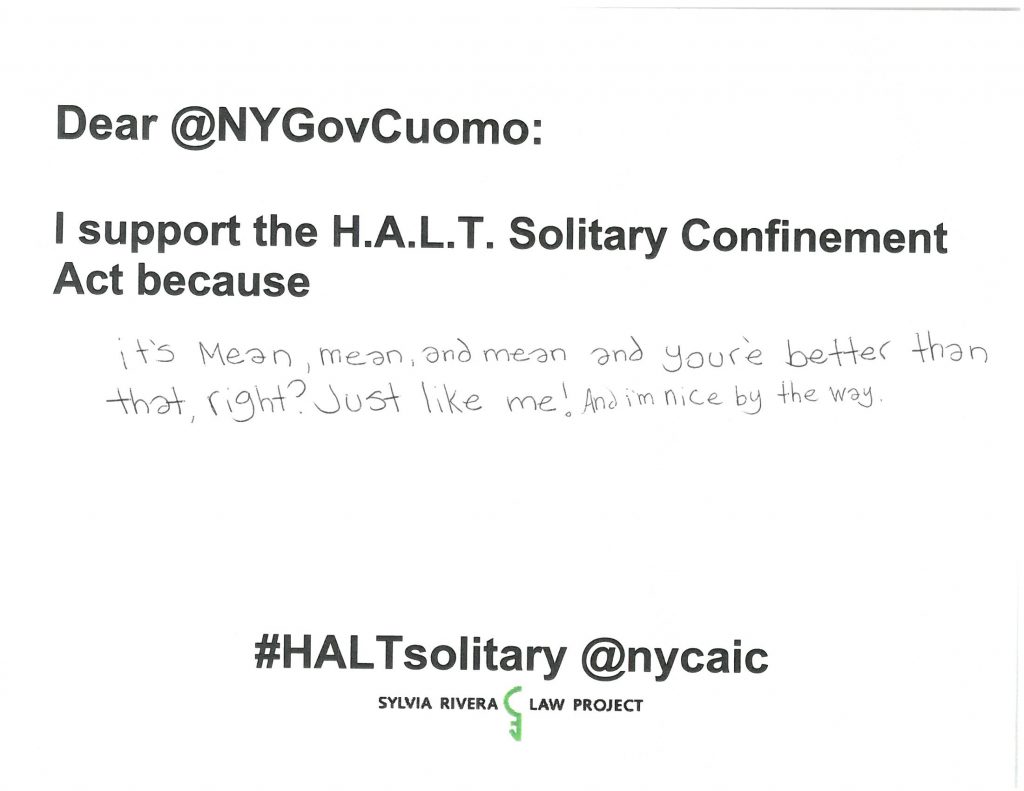 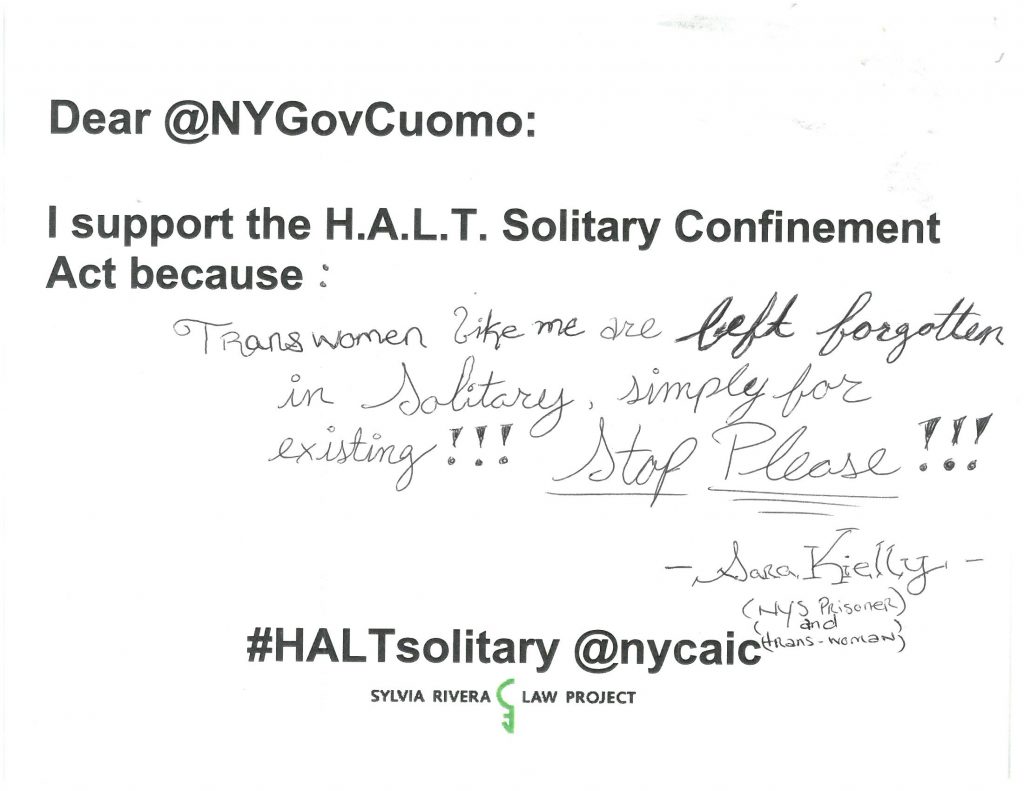 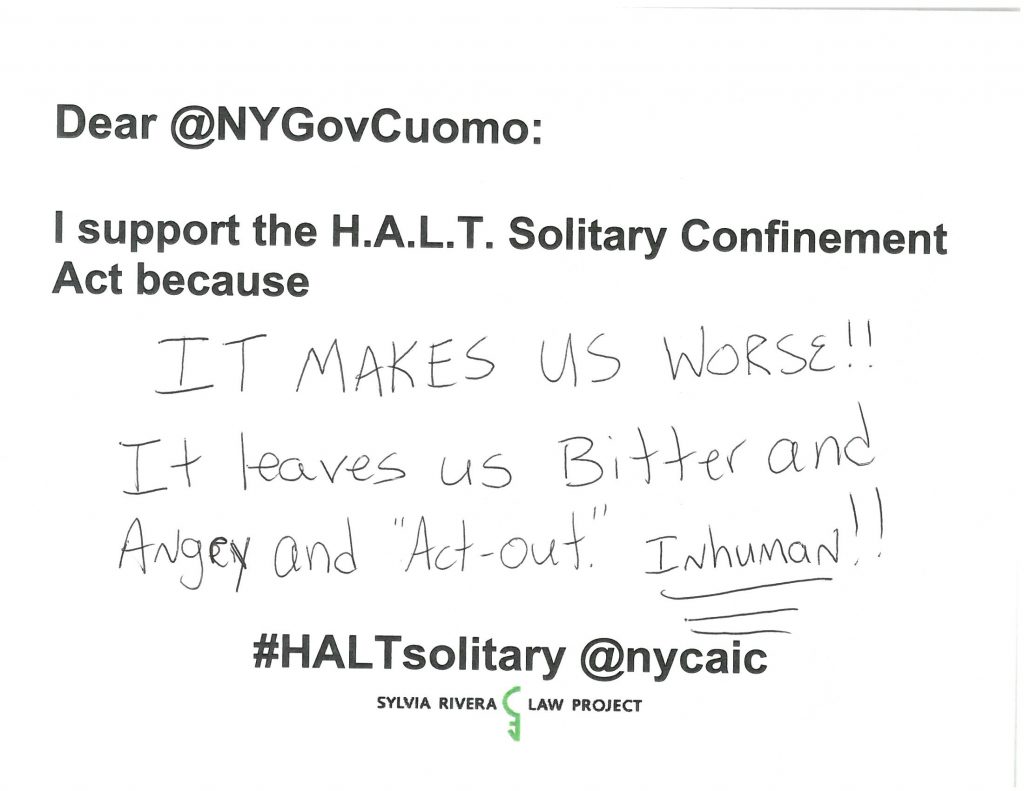 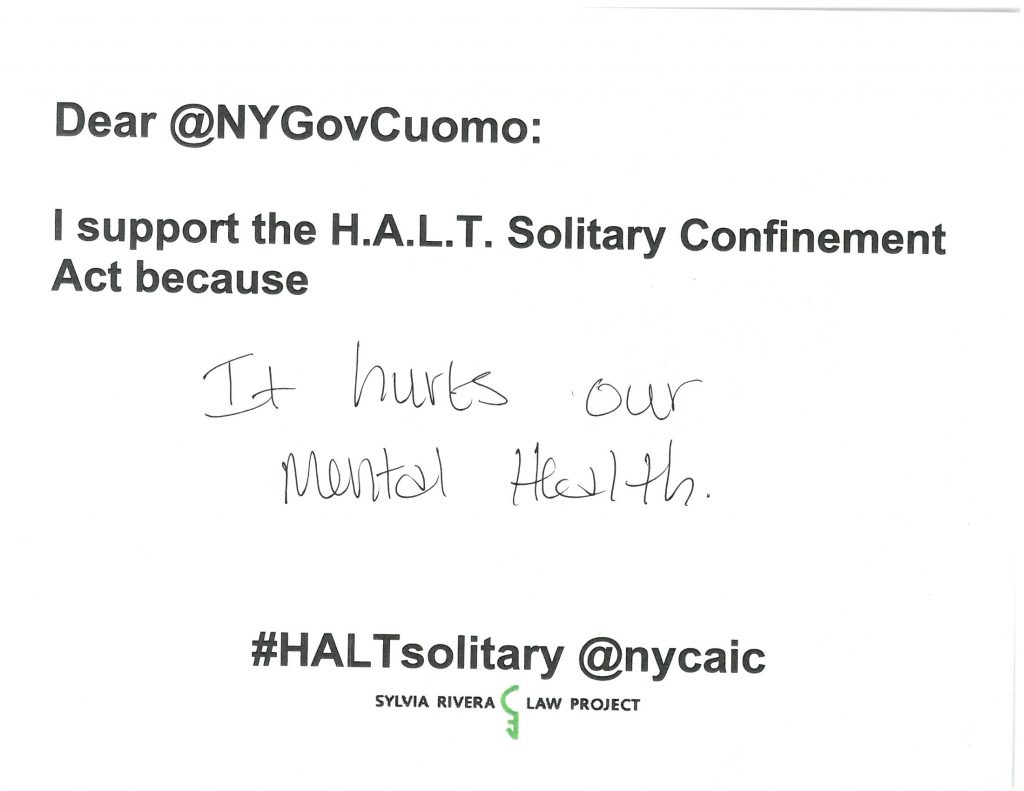 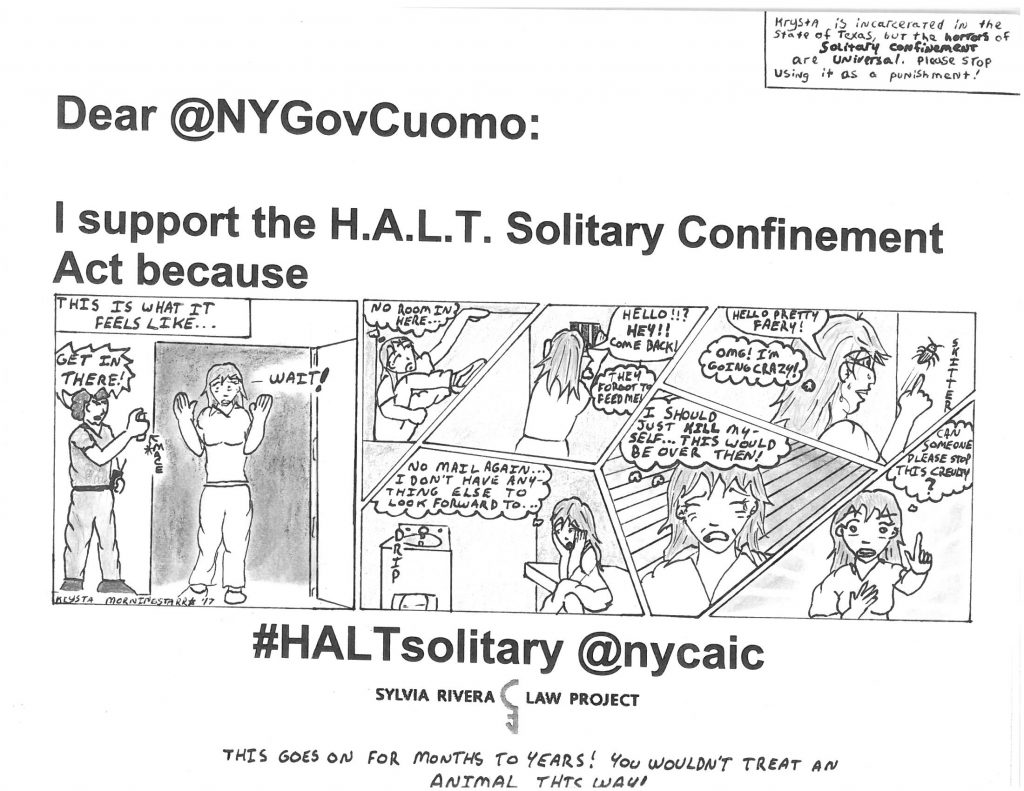 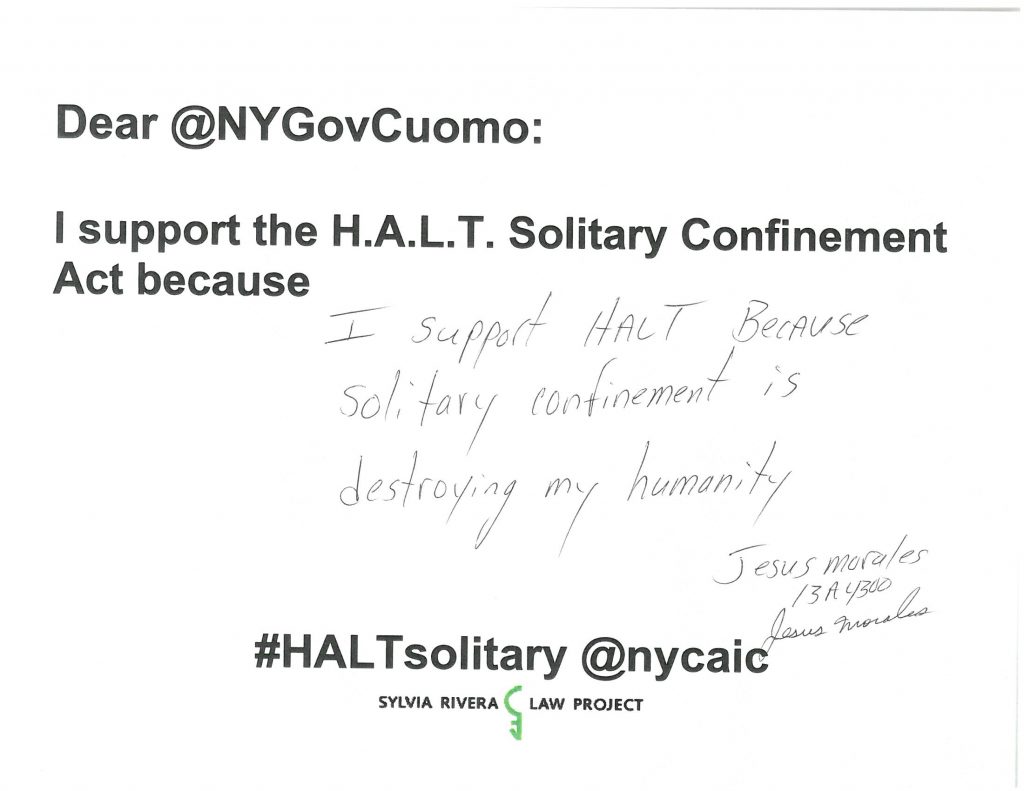 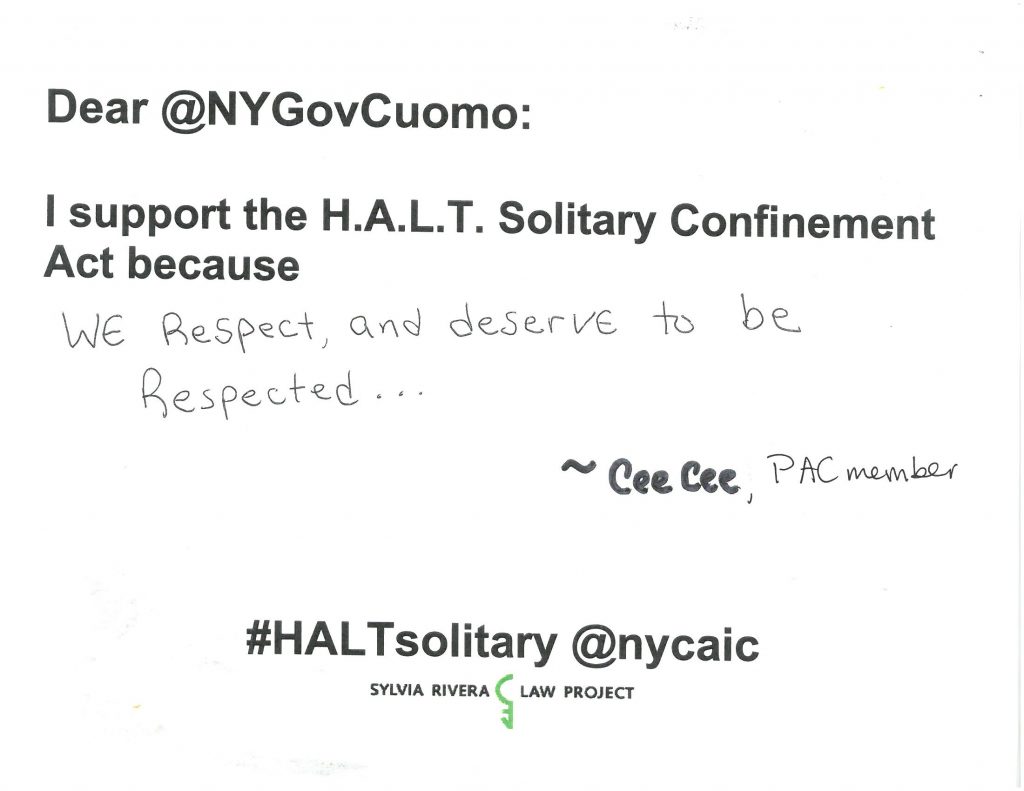 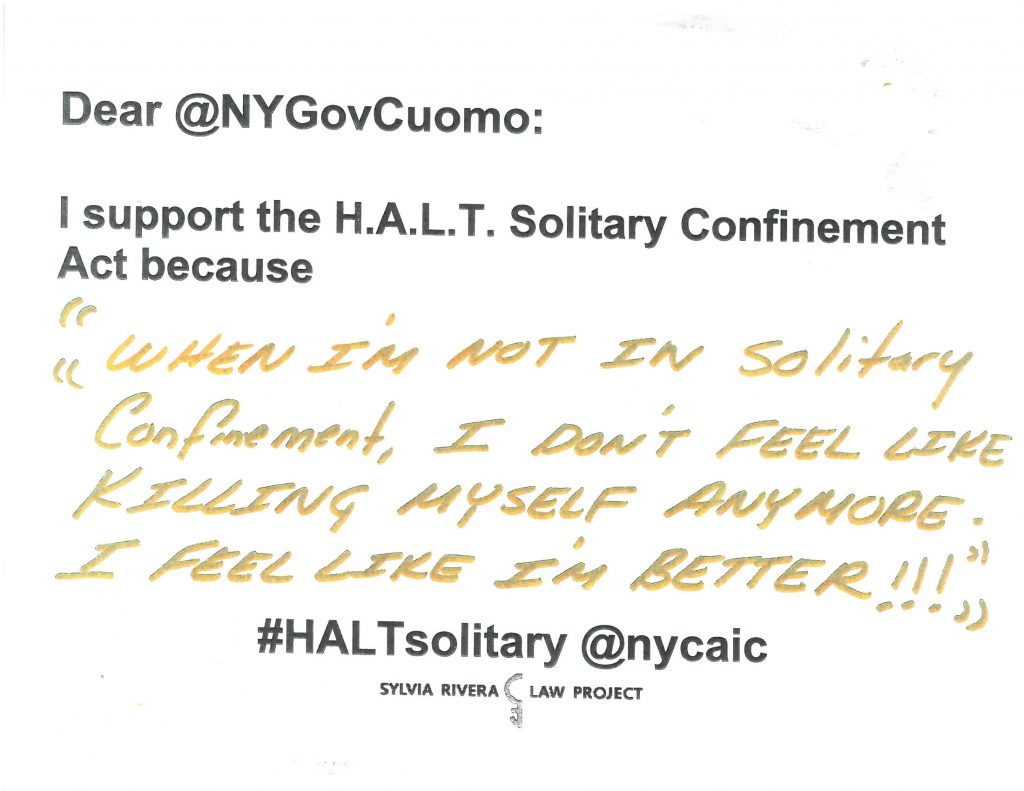 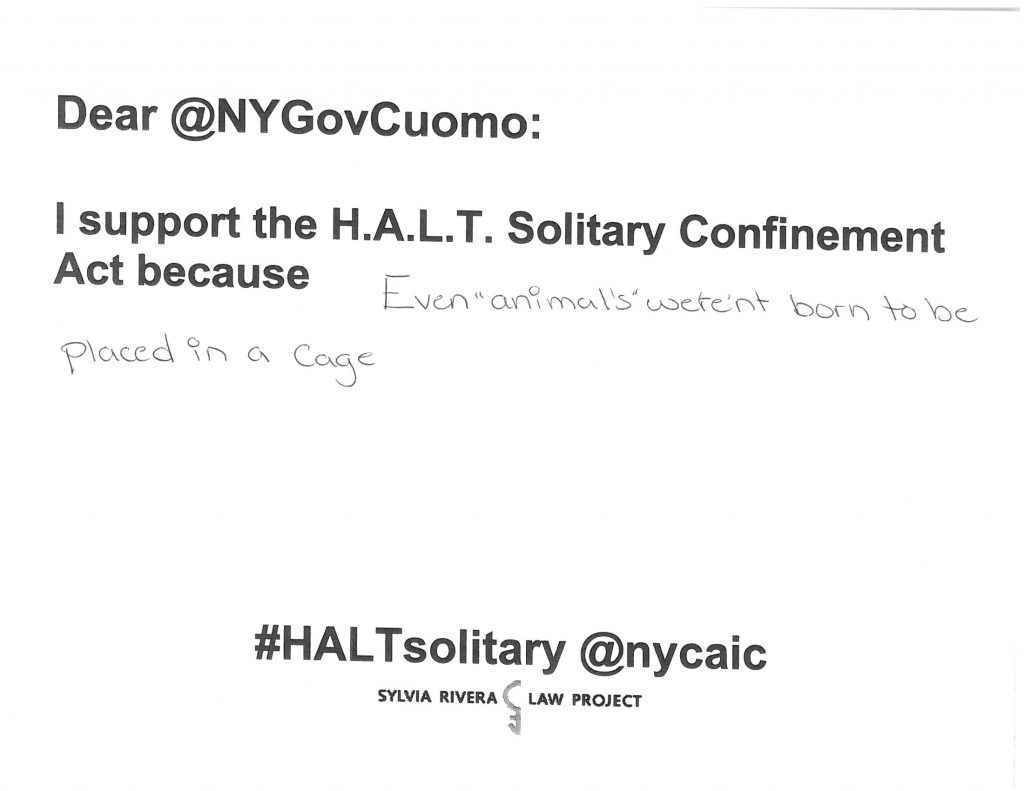 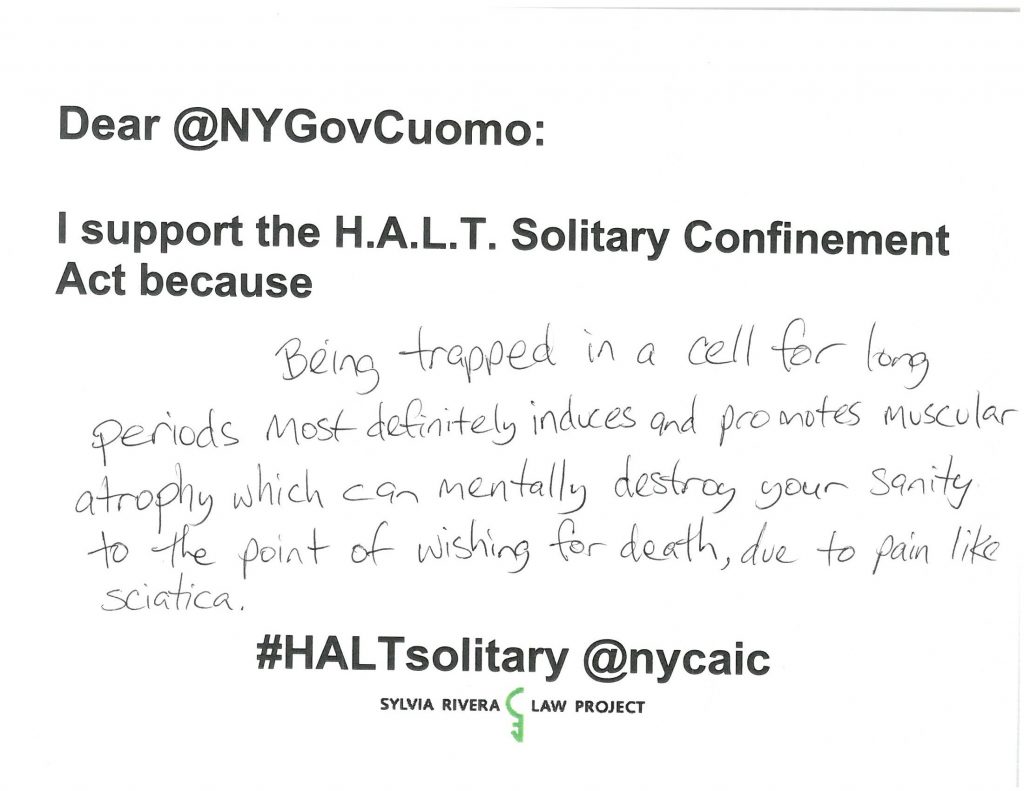 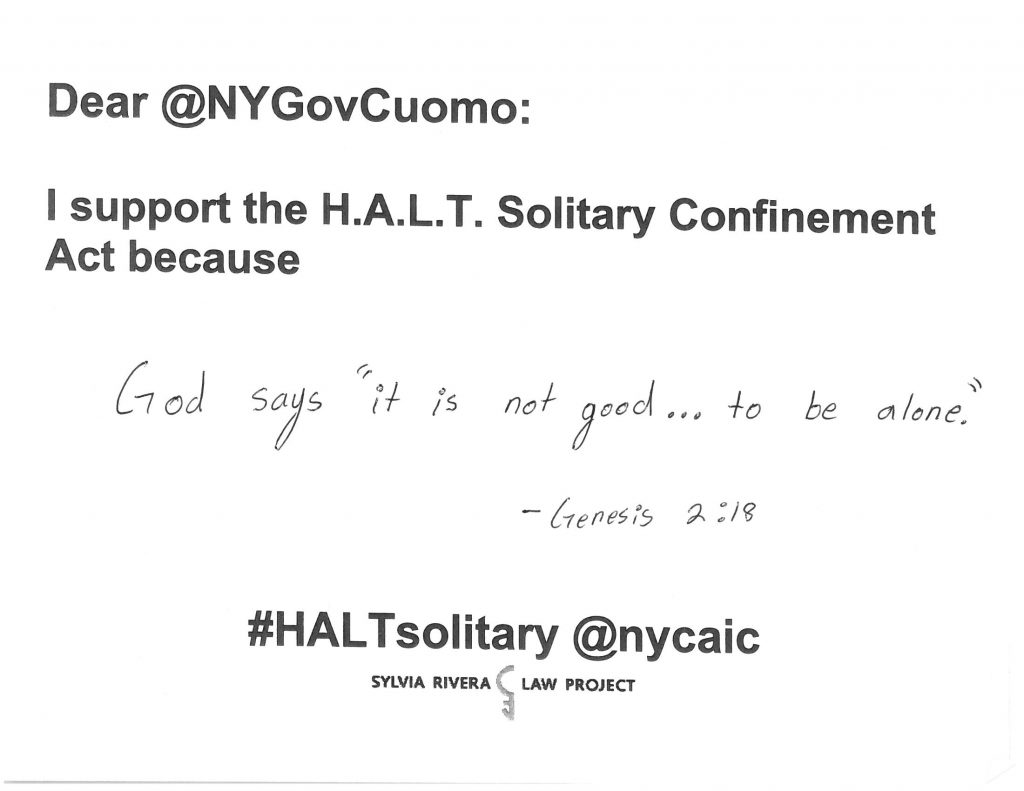 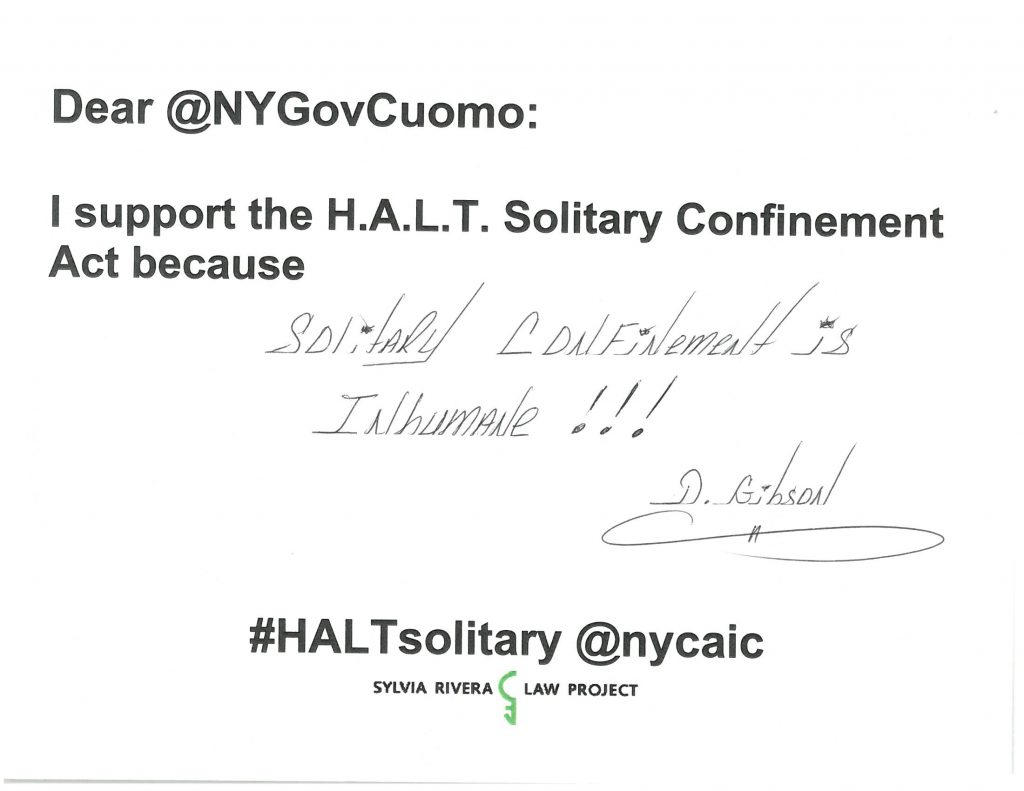 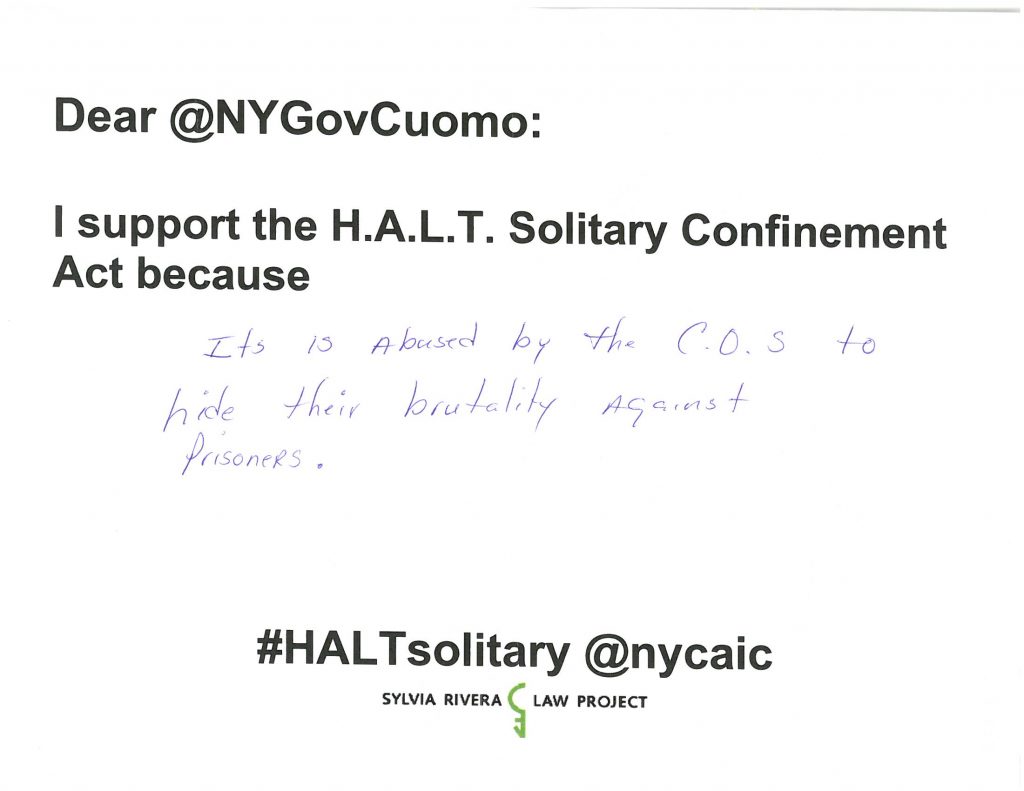 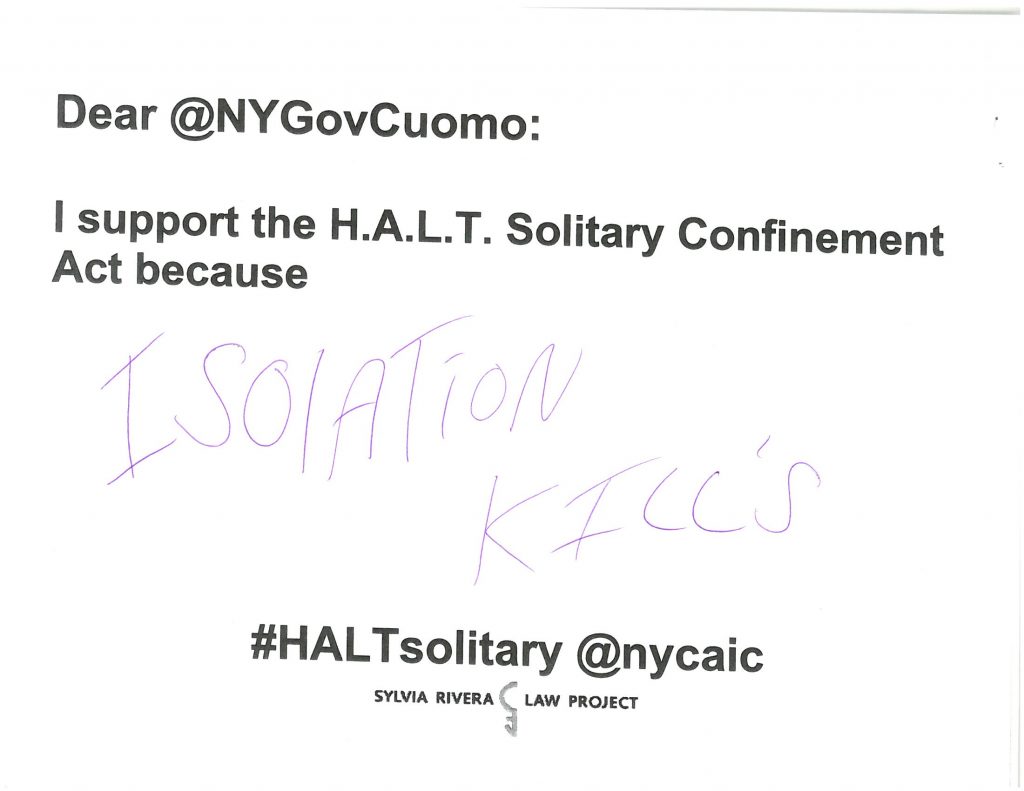 Feel free to download the blank sign here and tweet out your own message to Governor Cuomo on why ending solitary matters. To find out more about the HALT Solitary Confinement Campaign and to attend a meeting, please go to the CAIC website. We hope to see you at the next rally or action!

On the 23rd of each month, we gather together to demand an end to the use of solitary confinement in New York State. The date of the 23rd was chosen to represent the hours that our loved ones spend in solitary – 23 hours locked in the cell and 1 hour of recreation, often in a space the same size as or smaller than the cell.

In June 2017, CAIC joined SRLP and the Audre Lorde Project at the Transgender Day of Action. We were excited to draw these connections between our important movements. 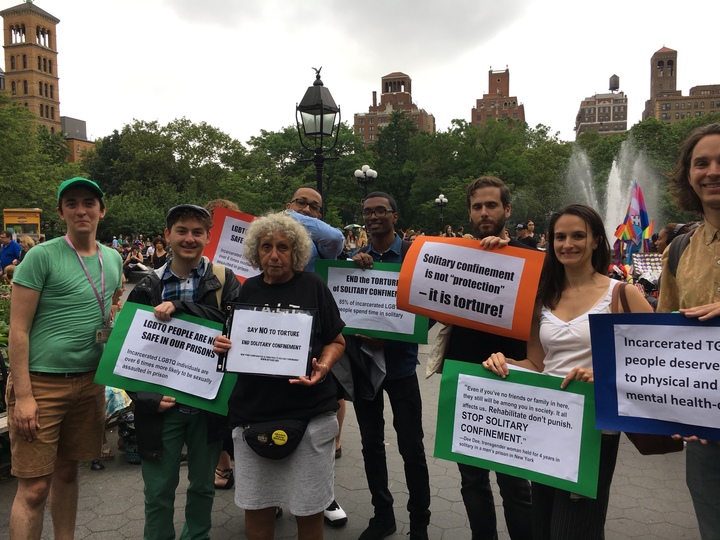 While Black people represent about 13% of all people in New York State, they represent 50% of those incarcerated here, and 60% of people held in long-term solitary confinement units. Check out NYCLU’s Report Boxed In to learn more.

Despite laws attempting to keep people with mental health diagnoses out of solitary, more than 20% of the people in solitary are on the caseload for the Office of Mental Health. Even though only 9% of the overall prison population is in solitary confinement, 40% of all suicide attempts occurred while in solitary in 2014 and 2015. Check out NYCLU’s Report Boxed In to learn more.

Trans, gender non-conforming, and intersex (TGNCI) people are often placed in solitary purportedly for their own protection, but the isolation only makes TGNCI people more vulnerable to staff abuse. Read more about the experiences of trans women in the NYS prison system in this expose from Solitary Watch, and from this personal essay written by one of SRLP’s PAC members, Dee Dee Webber.

In our work at SRLP, we often see people placed in solitary confinement because they “disobeyed a direct order.” In reviewing their case file, we often find that this means a TGNCI client asked a guard to use the right pronoun for them or asked them to stop using racist and homophobic slurs when speaking to them. This action – standing up for your dignity and humanity – can lead you to solitary.

News from the Prisoner Justice Project!